OSAKA/TAIPEI — Hon Hai Precision Industry, better known as Foxconn Technology Group, is considering producing small to midsized displays for Apple, automakers and others at its $10 billion factory planned for the U.S. state of Wisconsin, people familiar with the matter said.

Foxconn’s shift to making diversified displays for cars, personal computers, tablets, mobile devices, televisions and niche products represents a change from its previous plan to churn out large panels, mainly for TVs, at the new plant. Production of large panels would have required a more complete local supply chain and greater initial investment in equipment.

In response, Foxconn said “it is fully committed to this significant investment” in the U.S. The Taiwanese company also said the total amount of $10 billion has not changed.

The shift in Foxconn’s plans comes as global panel makers face a glut of TV displays that likely will last for years, as many Chinese companies, including BOE Technology Group, are aggressively adding capacity.

Foxconn is the first Apple supplier and one of the most notable foreign companies to respond to U.S. President Donald Trump’s “Made in America” call. Company Chairman and founder Terry Gou last July announced the plan to build a $10 billion liquid crystal display project and create 13,000 jobs in Wisconsin over four years, an investment that Trump said would not have taken place if not for his efforts to bring manufacturing back onto U.S. soil.

“But later they figured out that it might be more feasible and efficient to build a sixth-generation display plant or an 8.5th-generation factory from which they could move some equipment from Asia.” 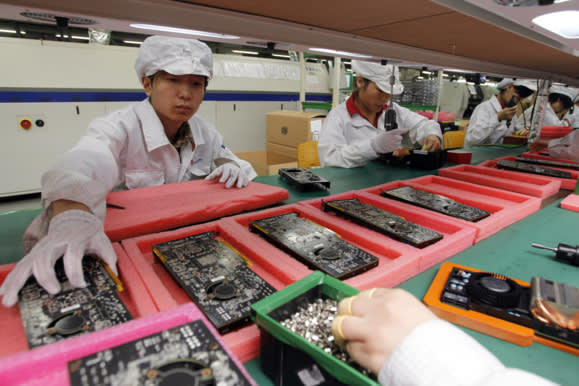 Workers assemble components at a Foxconn factory in Shenzhen. The Taiwanese contract maker of consumer electronics is building a $10 billion plant in the U.S. state of Wisconsin.   © AP

Supply chain sources suggest the incomplete local supply chain was a big obstacle to Foxconn’s previous plan to churn out large panels from a 10.5th-generation production line for TV screens in Wisconsin. “It would require other companies like Corning to also set up a glass substrate facility nearby, as it’s almost impossible to ship fragile, huge-size glass materials from a distant place,” one person said.

Eric Chiou, an analyst at market research group WitsView, said he also understood that Foxconn was “very likely to turn to small-to-medium display manufacturing for their Wisconsin project.”

“It’s a reasonable turn. And it could lower the initial cost substantially and generate returns faster,” Chiou said.

He added that Foxconn’s new facility would still aim to supply Apple’s iPhones, although it is uncertain the company will be able to secure orders from the U.S. gadget maker. Sharp, owned by Foxconn, is a smaller supplier of 4.7-inch and 5.5-inch displays for iPhones than South Korea’s LG Display and Japan Display. Sharp also makes screens for iPads.

But Sharp is not a supplier for new iPhones in production later this year, and it does not make panels for Apple’s MacBook laptops. In addition, the U.S. lacks a domestic supply chain for final assembly of almost any consumer electronic device, such as smartphones or notebooks.

A facility focusing on small to midsized panels would also provide a foundation once Foxconn is ready to produce its organic light-emitting diode, or OLED, displays, and wants to bring that into mass production in the U.S., sources said. OLED technology needs to be built on the current LTPS — or low-temperature polysilicon — LCDs, which are widely used for screens for mobile phones such as the iPhone 8 and iPhone 8 Plus.

Samsung Electronics is currently the sole supplier of premium OLED screens for the iPhone X, while LG Display could start to supply some 3 million to 5 million units of such displays for Apple for this year’s upcoming iPhone range. Japan Display and Foxconn-controlled Sharp are still struggling to develop the advanced OLED displays.

However, the change does not mean Foxconn will back away from TV manufacturing in the U.S. “It’s more practical that Foxconn takes the semifinished large-size LCD display cells from elsewhere to make them into LCD modules and assemble them into the whole TV sets in the U.S.,” said WitsView’s Chiou.

“That assembly works for LCD modules, and TV sets would bring more jobs than the front-end, large-size display manufacturing facility that relies more on automation. President Donald Trump would be happy to see that, too,” Chiou said. Industry sources also suggest that manufacturing televisions locally remains a core part of Foxconn’s investment in Wisconsin.

Foxconn responded to the Nikkei Asian Review, saying the company in the first phase of the project will harness the latest-generation LCD manufacturing technology to produce liquid crystal display panels at its Wisconsin complex.

“[LCD panels] will be used in a wide range of applications that impact consumers’ daily lives, from the latest generation televisions to self-driving cars, notebooks and monitors, and in the fields of education, entertainment, healthcare, advanced manufacturing systems, office automation, interactive retail, and safety, among many others,” Foxconn said in an email.

Louis Woo, Gou’s special assistant, was quoted last month by The Journal Times in Racine County as saying that the Wisconsin Valley Science and Technology Park would have at least four manufacturing facilities, including one LCD plant and one assembly plant.

Groundbreaking is set for June 28, with Gou and Trump likely to attend, sources said.

Foxconn is currently building a 10.5th-generation LCD facility for large-size displays worth 280 billion New Taiwan dollars ($9.33 billion) in the southern Chinese city of Guangzhou. The project is scheduled to go into production next year.

Ok – Guvnor Walker, State Rep Robin Vos, and City of Racine Mayor Cory Mason – I’ll take that bet – and claim that not only do you fall short – but the only way SE WI. will be able to avoid Bankruptcy, is to implement higher property taxes in accordance with Chicago Federal Reserve Bank Policies!

Note: This post is based on previous work presented by the same authors at the forum “Navigating Pension Reform in Illinois: What Lies Ahead”, held on April 17, 2018 at the Chicago Fed. The original presentation is available here.

The State of Illinois has a very large unfunded pension liability and will likely have to pay much of it off by raising taxes. The Illinois Commission on Government Forecasting and Accountability estimated the state’s unfunded liability at $129.1 billion in mid-2017,[1] which was about 19% of state personal income.[2] Benefits to public employees are protected under the Illinois Constitution, and a recent attempt to reduce the unfunded liability by reducing retirees’ benefits was struck down by the Illinois Supreme Court.[3] So, assuming that the state can’t reduce its current pension obligations and that it wants to maintain its current level of services, Illinois residents are going to have to pay higher taxes. What’s the best way to do it?

Because the debt is so large, it’s unrealistic to think that new taxes (such as a tax on legalized marijuana or financial transactions) or increases that affect only a narrow segment of the population will be enough.

Illinois will have to find additional revenues from already existing tax bases, either by increasing rates, expanding the definition of what is taxable, or a combination of the two.[4] Illinois state and local governments have three primary tax revenue sources—income, sales, and property—and each presents a unique set of tradeoffs in terms of how it affects the economy and who pays it.

There are several good reasons to pay off Illinois’s pension debt through a statewide residential property tax:

To Consider – the Counter-Claims of Governor Scott Walker,  Boss Vos, and Cory “The TIC” Mason, who plan to finance SE WI with Foxconn PLUS a multi – billion Taxpayer funded investment:

In what’s being called the largest economic development project in state history, Taiwanese electronics giant Foxconn plans to build a $10 billion plant in Wisconsin that would create liquid-crystal display panels and employ as many as 13,000 people.

The planned Wisconsin plant is expected to open in 2020 and be part of a 20 million-square-foot campus on at least 1,000 acres — a location Gov. Scott Walker has dubbed “Wisconn Valley.”

The plant is intended to be one of the largest manufacturing campuses in the world, according to Walker’s office, and could draw 10,000 construction jobs over the next four years while the plant is built.

Walker’s office projected the project would create at least 22,000 “indirect and induced jobs” throughout Wisconsin and will generate an estimated $181 million in state and local tax revenues annually, including $60 million in local property taxes.

Walker said the Foxconn jobs will have an average annual salary of more than $53,000 plus benefits.

” Racine Floating A Sales Tax” City of Racine commits-to-Paris-climate-accord while supporting Foxconn that exceeds the pollution standards. Then suggesting a .5 sales tax after Racine County spends millions on taking land from taxpayers to support Foxconn. We bring the perspective down to the local level to discuss issues that affect our own city of Racine, WI We’re about investigative reporting on topics that matter: corruption, conflicts of interest, broken systems, abuses by institutions and individuals with power, whether that’s government, nonprofits, or the press itself.

State, County, and Local Governments are investing $Billions$ in borrowed money; abusing eminent domain, “Blight” designations,  TIF guidelines, Pollution Control Standards, destroying the preservation of Farmland and  Wetlands, while redirecting the natural flows and purity of massive amounts of fresh water, along with a Healthy Environment, to an Entity which promises to produce LCD TV screens – employing 13,000 people at an average salary of $53K each + Bennies,  all to prop up the Failed (and Bankrupt) Governments of SE Wisconsin – which continue to loot and oppress the remaining, and largely poor, minority, under-educated,  criminal, and exploited underclass.

MILWAUKEE — Every dollar of state incentives for the Foxconn Technology Group project will return $18 in economic impact in Wisconsin within 15 years, according to the Metropolitan Milwaukee Association of Commerce.

MMAC on Friday released its analysis of the projected impact to Wisconsin’s gross domestic product from the $2.85 billion incentive package to entice Foxconn to build an approximately $9 billion manufacturing campus in this state — specifically in Mount Pleasant.

“GDP is the best measure of the value added to the economy,” stated MMAC, which has more than 2,000-member companies supporting more than 300,000 jobs. The analysis is based on the state’s tax credit agreement executed with Foxconn on Nov. 10.

The Foxconn development is projected by MMAC to add $51.5 billion to Wisconsin’s GDP over the 15 years in which the state would pay out $2.85 billion under a fully executed incentive package — assuming Foxconn creates 13,000 jobs.

Of course, it will never happen – just like so many other Politically motivated schemes in SE WI – CON – SIN. Such as Machinery Row!

So just who is the Metropolitan Milwaukee Association of Commerce? Why it’s just another taxpayer funded government grant dependent Non-Profit!

Metropolitan Milwaukee Association of Commerce mouthpiece Timothy Sheehy is just another taxpayer funded government shill who will lie to promote the failed Walker Administration. His compensation package depends upon it.

From the most recent publicly available Form 990 on the Internet – it seems that Metropolitan Milwaukee Association of Commerce mouthpiece Timothy Sheehy compensated himself with over $500,000 in wages and nearly $20,000 from others.

It needs to be said again –

Metropolitan Milwaukee Association of Commerce mouthpiece Timothy Sheehy is just another taxpayer funded government shill who will lie to promote the failed Walker Administration. His compensation package depends upon it.

While the entire thesis that Foxconn will deliever and 18-fold of return upon investment depends upon: